Milestone Committee of Institute of Management Technology (IMT), Nagpur organised its annual flagship festival ‘Milestone 35’on November 4 and 5, 2017. The various non-academic forums and clubs of the Institute organised events to test the skills of the participants. Some of the colleges that participated in the festival were IBS Hyderabad, IBS Kolkata, IIPS Indore, Garware College, Atlanta College, G S College of Commerce and Economics, IIM Nagpur and Raisoni College.

The first day commenced with events such as, ‘Just Like Old Times’ conducted by Literati, the literature forum and ‘Clash of Couch Potatoes’ by Envision, the entertainment forum. The day progressed with a street play competition organised by Rangmanch and a creative strategy event by Inshades. An interesting match of ‘Foot Pool’ and ‘Gully Cricket’ was organised by the Sports Committee. Multiple bands competed against each other in ‘Whiplash- The War of Bands’ and each band put up a scintillating show of musical prowess. The day concluded with a star-studded night, where stand-up comedian, Rahul Subramanian tickled the funny bones of the crowd with his impeccable timing and the progressive-indie band, Paradigm Shift, left the crowd in a trance with their soul-stirring musical performance.

Milestone 35 raised the bar on day two with an interesting line-up of events. IMT Nagpur Toastmasters Club organised an extempore competition which was judged by distinguished members of Toastmasters International. CSGD and Imprint conducted innovative contests where participants showcased their creativity. ‘Mirage- The Fashion Show’ left the spectators spellbound as competitors set the stage on fire with their panache. The night ended with captivating music by VH1 Supersonic Disc Jockeys, Zenith and Julia Bliss. The crowd danced throughout the night to the upbeat music.

The Milestone Committee left no stone unturned to make this event a grand success. Students from participating colleges were mesmerised by the grandeur of the event and the hospitality provided to them. The event ended on a positive note, leaving behind an experience that student managers would cherish forever. 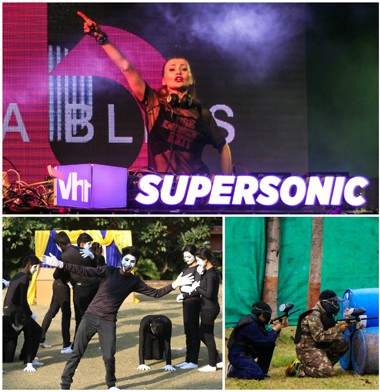