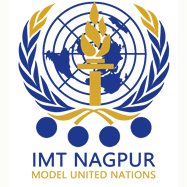 About MUN:
Model United Nations is a simulation of the United Nation where students take on the role of UN representatives. Members of other international bodies and national cabinets learn about the working of International politics and problem-solving by engaging in matters concerning security, economic development, etc. Delegates also learn the complexities of international negotiations and teamwork.

About MUN-IMTN:
Institute of Management Technology (IMT) Nagpur conducted its first ever Model United Nations in the year 2014. IMT Nagpur organised the third edition of Model United Nations (MUN) 2018, a two-day conference on December 8 and 9, 2018, in association with the UN Secretariat of the Institute. The event commenced with the lighting of the lamp by the esteemed chairpersons and faculty members, following which the Secretary-General of MUN 2018 declared the session open.

This convention saw participants from various colleges from the country, representing themselves as delegates of different countries and discussing crucial agendas which would contribute towards world peace, economic growth, fruitful ecological protection measures and comprehensive cooperation amongst all the nations. Last year IMT-N MUN 2018 comprised of four committees namely, United Nations Industrial Development Organisation (UNIDO), United Nations Environmental Programme (UNEP), Economic and Financial Affairs Council (ECOFIN) and Disarmament and International Security (DISEC). These four committees came together and deliberated upon issues pertaining to Belt-Road Initiative, Climate Engineering, Collateral Damage due to Trade and Tariff Wars and an Armed Confrontation between Iran and the US or one of its allies.

The event reached its culmination with the delegates getting rewarded for their excellence during the deliberations, earning the winners the title of ‘Best Delegate’, ‘Best Position Paper’, ‘High Recommendation’ and ‘Verbal Mention’. This year IMT-N MUN'19 seeks towards a bigger and better event to make the student managers understand the importance of the current matters that can affect the economic growth and peace of the world.