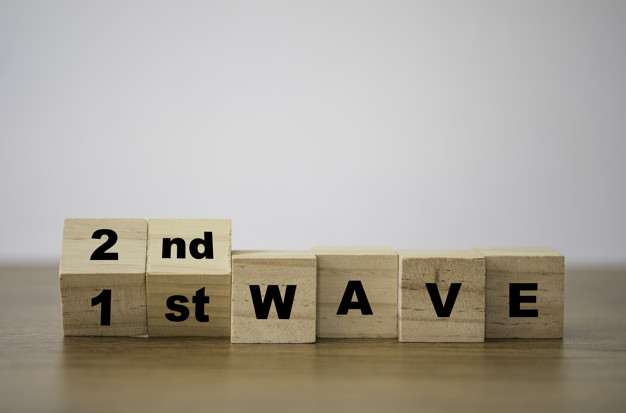 The optimistic expectations of multiple international rating agencies and IMF’s bright prediction about India’s growth recovery have come to a screeching halt disappointingly with a sharp spike in covid-19 cases across the country. However, the pattern is not unexpected and such potentially deadly spread of the virus has already been witnessed in countries abroad and the lessons are still not learned, unfortunately. Also the chief economist at IMF, Dr Gita Gopinath very neatly cautioned way back in December 2020 on the IMF portal and in various discussions that the successful recovery of any virus-inflicted country depends on how fast countries will win their war against the virus. There is a clear trade-off between containing virus spread and potentially more deadly virus mutations, the way we are experiencing now and the much needed economic recovery. In a similar vein, former India’s RBI Governor, Dr Raghuram Rajan convincingly argued in an interview with Bloomberg that “anybody paying attention to what was happening in the rest of the world, say in Brazil, for example, should have recognized the virus does come back and potentially in more lethal forms.” Now the challenge lies in controlling the virus, the pace of immunizations and getting our actions together.

The 2nd Wave: The biggest cataclysm to have struck the country in living memory

An unprecedented rise in Covid-19 cases is likely to slow down India’s economic recovery and prospects of large industrial houses in general, but can further wreak havoc with the small, medium and micro-enterprises. Apart from that, migrant labour from last year virus backlash are yet to recover. The 2nd wave in India has been far more deadly than the first wave as the cases and deaths continue to rise at an unprecedented rate with erratic semi and full lockdowns, much to the distress of the nation’s informal sectors – accounting for almost 2/3rd of economic activity and a massive 92.5% of livelihoods.

The country has been reporting over 3 lakh daily cases for over weeks together. In comparison, India had not reported even 1 lakh daily cases during the first wave of the pandemic in 2020. As of Tuesday, May 18, 2021, India reported the highest single-day Covid fatalities and it climbed to 2, 78,719 with a record 4,329 new victims, according to the official sources.

Shortage of key healthcare facilities, oxygen cylinders, beds and critical drugs has made the situation worse during the second wave and reports suggest that just before the Covid wave hit India, ICU beds declined by 46 per cent, and medical oxygen by 36 per cent – pointing to a drastic fall in country’s health infrastructure at a time when it is badly needed.

Expert’s opinion points to the blatant absence of proactive action on the part of government executive machinery and the leadership to prevent or stay prepared for the second wave that only proved catastrophic. Former Reserve Bank of India (RBI) governor Raghuram Rajan, who has censured the government for handling the second Covid-19 wave and has stated that the overwhelming surge of Covid-19 cases has revealed complacency among authorities after the first and highlighted “lack of leadership and foresight” as key factors that have hurt India badly during the 2nd wave. “If you were careful and cautious, you had to recognize that it wasn’t done yet,” Rajan was quoted as saying in a Bloomberg interview.

Keep aside the proactive action, the apathy encouraged mass gatherings in the form of election campaigns, Kumbh Melas and others. Further, masses are being misled by government authorities by saying that the country emerged victorious by defeating the virus. But in reality, covid related cases in India started rising again from March and accelerated in the following months.

Given the grim scenario, many industry bodies and medical experts like Dr Randeep Gueria of AIIMS Delhi and Dr Anthony Fauci, Eminent Infectious Diseases Expert and Medical Advisor to the US president have called for a nationwide lockdown with some concrete measures in place to save the situation from spiraling out of control further. The WHO has blamed the 2nd wave of the pandemic on premature opening up, flagrant relaxation of public health measures, as well as the emergence of new variants of virus and unequal vaccine sharing.

The scale of destruction brought about by the 2nd wave is impalpable, as the current deadly infectious strains that continue to take lives, overwhelm unprepared healthcare infrastructure and dislocate families of labor that bound to wreak havoc with the economy, more particularly the informal sectors – small businesses, traders and migrant labor. Though the Indian government has denied the possibility of a complete nationwide lockdown, several states are extending curfews and making restrictions more stringent to curb the spread of the virus. Hence, the economy is witnessing a contraction on the back of weak economic in response to local restrictions.

Data from the Confederation of All India Traders (CAIT) testifies to this. CAIT’s research estimates that retail traders across the country have suffered business losses to the tune of INR 3.5 lakh crore, while wholesale traders have faced losses worth INR 1.5 lakh crore. The unemployment rate in India has also increased,  with the Centre for Monitoring Indian Economy reported on May 4, 2021, that the second wave has left as many as 72.5 lakh people jobless in India in April, taking the unemployment rate to 8 per cent which the government agencies vehemently denies. This bound to lead to severe near-term growth concerns and potentially turn the market expectations deleterious.

Though there is not much of systematic assessment study of 2nd wave impact on small businesses but the repercussions are clearly seen from various sources and across sectors. Businesses such as malls, retailers and restaurants are in a disarray as they grapple with restrictions, including weekend lockdowns and night curfews in different states and districts, as the country braces to face the 2nd wave. But daily wagers, casual workers and small businesses, which lack deep pockets, have been hit very badly.

Sources in these businesses are concerned that the lockdown should not be a way of handling the spread of the virus, as one representative very neatly reasoned out by saying, ‘This (lock-down) is a beginning, we hope that this would not be stretched further. If this goes for more days on, it will be much worse than that of the first lockdown. When production chain breaks, it will have an impact on demand, supply and overall economic and business activity of the country’.

The lack of comprehensive and cohesive approach and foresight needed in crisis management continues to take its toll on these businesses and the sustenance of the working class in those sectors. With different rules and restrictions in different states and union territories, businesses are not only finding it difficult to conduct day-to-day operations but the ad-hocnature of policy intervention creating a lot of ambiguity amongst consumers leading to a rapid decline in footfalls and sales revenues across business outlets.

Frequent night curfews, last-minute decisions on weekend closures and complete lockdowns in several places are making sustenance extremely difficult and posing a grave threat to millions of those who are directly and indirectly employed in the retail sector across the nation. This is also causing immense stress to the migrant workers and potentially exposing them to disease, malnutrition and vulnerability. Lockdowns affect worker’s mobility and hence their ability to earn a living. Recent research established a clear link between restricted mobility and loss of livelihoods – in Delhi for instance, a 50% drop in mobility led to a 39% fall in earnings. One can only imagine the fate of the very poor and vulnerable sections of the population.

Businesses are grappling with a different set of issues based on local restrictions. In Maharashtra, retailers are asking the State government to open up online deliveries for all goods, while in Delhi, restaurant players have raised concerns for not being able to get e-passes for movement of staff and deliveries during the weekend lockdown hampering their business operations. In Delhi, dine-in is not allowed and restaurants only source of revenues currently are home deliveries. But most restaurants are either not getting approvals for e-passes or facing a high rate of rejections by the concerned authorities. This only calls for more of a cohesive and a responsive approach to these very concerns.

The RBI Governor on May 5, 2021, announced a slew of measures to offset the economic impact of the second Covid-19 wave on informal sectors and small businesses. To incentivize credit flow to MSMEs borrowers, scheduled commercial banks were allowed to deduct credit disbursed to new MSME borrowers from their net demand and time liabilities (NDTL) for calculation of the cash reserve ratio (CRR). But, the issues that are unique to small businesses should be considered while devising any such policy support.

Apart from the monetary support, so far the dearth of policy action remains in terms of active income infusion directly into the pockets of those very poor and vulnerable and it has been very inadequate. India spends just 2.2% of GDP compared to 12% provided by the similarly afflicted Brazilian government. Such policy support becomes so imminent especially when India leads the global Covid-19 triggered poverty projections, with World Bank estimating about 12 million of its citizens will be pushed to the very margins – “extreme poverty”, with less than US$ 1.90 per day – in 2021, a direct result of the pandemic’s economic destruction. These are the difficult times when Indian corporates further reinforce their CSR activity and pitch to help the vulnerable to tide over these tough times and help support their employees well.

While the policy plank seems to realize the urgency and in support of the ground realities, what matters is how agencies coordinate while devising an integrated strategy both at the national level and also at the sectorial level, especially those of informal sectors and small businesses which are vital to sustaining incomes and jobs. At the same time, problems are specific to local settings as the intensity of the virus is varying in nature across the nation. This only calls for proper coordination and optimization of medical infrastructure by the related agencies. It’s being reported that in some places medical facilities are very much available but badly lack skilled manpower to operate the equipment while other places face acute shortages of basic medical facilities leading to avoidable fatalities and an opportunity to save precious lives. It’s equally critical to have proper foresight and a holistic approach to the pandemic problem in terms of ramping up much-needed testing and immunization drive as a way to stop the spread of the virus further and allow much-needed normalcy to return. This would seem to be the only way forward for the economy to return to its trajectory which in turn not only brighten-up country’s growth prospects but save the travails of small businesses and the most vulnerable a great deal.